This is the office of Wild Things Inc. They are the largest importer of exotic animals in the U.S.. They also schedule safaris and big game hunting, which is not politically correct, but apparently lucrative, as Kelly, the accountant here, embezzled $300,000 from the company. Kelly has been under surveillance. The authorities saw her go into the office a couple days ago but no one has seen her since, both Kelly and the money have vanished. You are friends of Kelly’s. She has contacted you and promised each of you $5,000 if you can find the incriminating piece of paper she left behind. The authorities have gone to lunch and won’t return for an hour. You have just one hour in which to find that incriminating piece of paper and get out before the authorities return and charge you as co-conspirators. Unfortunately as you enter the office you realize that if you open the door without entering a code, an alarm will go off, and you will be caught for sure. Now in order to avoid jail and get $5000 you need not only find that piece of paper, but also escape. You have just 60 minutes. 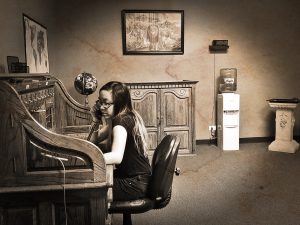